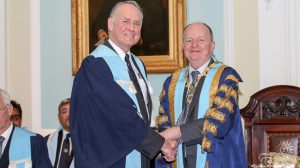 The Royal College of Surgeons of Edinburgh have awarded their Bruce Medal to the College’s Professor of Anatomy, Professor David Sinclair at the recent College diploma ceremony on 17 March 2017.  Professor Sinclair is also an Honorary Professor of the School of Medicine at the University of St Andrews and received the Bruce Medal in recognition of his contribution to the College over a number of years, in particular through his teaching of anatomy.

The Bruce Medal was established by the Royal College of Surgeons of Edinburgh in 1966 in memory of the late Sir John Bruce, a former President of the College.  The Medal is awarded from time to time to a Fellow of the College in recognition of outstanding contribution to surgical knowledge or teaching.