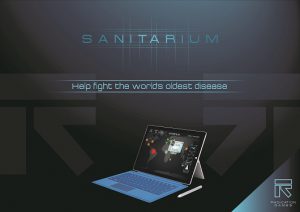 It won Gold in the Healthcare category at this year’s Serious Play Awards and third place in the Microsoft Azure Cloud Gaming Innovation Challenge – a particularly impressive achievement for the only student team taking part.

Tuberculosis kills someone every 20 seconds, according to the TB Alliance. At any moment, more than 11 million people are suffering from an active infection and the team hope that the game will increase awareness of this preventable tragedy.

The game was developed by Radication Games, a team of undergraduate students at Abertay University, as their third year group project. It uses a mathematical model developed by Professor Stephen Gillespie and Dr Ruth Bowness at the University of St Andrews.

As well as raising awareness of tuberculosis, the game helps test the mathematical model and provide data back to Professor Gillespie’s infection research group.

“You have as much chance of surviving Ebola without treatment as you do of surviving tuberculosis with treatment. We want to use games technology to help tackle this massive problem, through raising awareness and helping test the scientists’ mathematical model.”

The mathematical model developed by Professor Gillespie’s team predicts how the disease spreads. It was created as part of research to reduce the cost of clinical trials which can cost many millions of pounds and take up to ten years from the inception of a study to the publication of the final paper.

The hope is that creating a game for release worldwide can raise awareness of TB and help test the mathematical model, informing the design of future clinical trials and saving time and money.

Professor Stephen Gillespie from the University of St Andrews said: “Tuberculosis is a disease that is still killing more than a million people a year. Part of the problem is that there is stigma associated with the disease and many people do not seek treatment.

“Once diagnosed, a lot of patients feel better long before it is safe for them to stop treatment and so the disease may come back and may become resistant to antibiotics.

“By developing Project Sanitarium into an effective teaching tool for the public and health professionals we can demystify the disease and help more patients to complete their treatment and be cured.”

Abertay University was originally approached by the University of St Andrews to use its mathematical data to develop a game.

Mathematician Dr Karen Meyer, who moved to Abertay University from St Andrews, was the project’s academic mentor and worked with Dr Iain Donald as production supervisor.

The game involves making strategic choices about allocating resources to treat patients, as well as smaller classic arcade-style games which explore specific details about how drug treatments work and how to read x-rays. 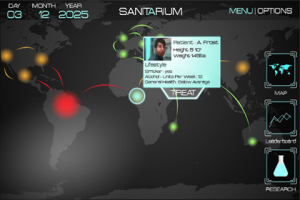 John added: “Studying at Abertay has been an incredible experience, as we are trusted to develop full games from a very early stage and work directly with industry clients.

“It’s been fantastic to work with world-class scientists to create a completely new type of game, all focused on helping improve the lives of people with tuberculosis through raising awareness of the disease, improving our scientific understanding, and potentially supporting charity fundraising as well.”

The game is powered by Microsoft mobile and cloud technology so players can receive real-time updates on the virtual patients they are treating.

Radication Games have now entered their final year of studies where they will develop the game’s design and underlying technology further. They intend to form a company after graduating next year, to develop a larger version of the game for release worldwide.

The design for the full game includes an in-game economy based on the financial and time costs of treatments, which could allow for charitable donations by players paying to buy more game currency.

The game prototype is available to download for free for Windows and Mac.

The full story available is avialable online at BBC Scotland and the TV report can be viewed on the BBC iPlayer (from 17 minutes in on the media player).